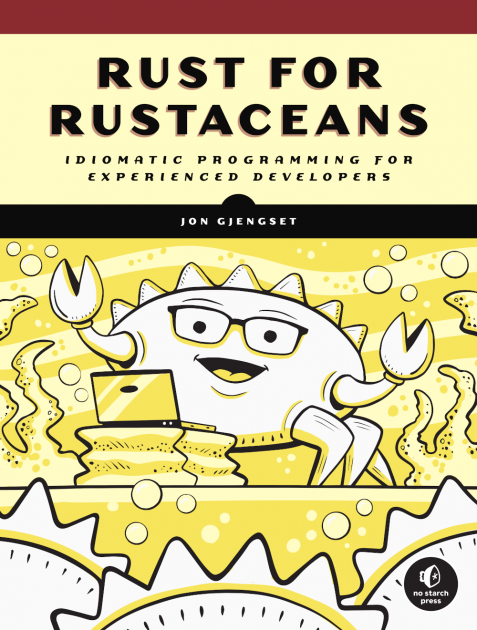 For developers who’ve mastered the basics, this book is the next step on your way to professional-level programming in Rust. It covers everything you need to build and maintain larger code bases, write powerful and flexible applications and libraries, and confidently expand the scope and complexity

You can buy the book directly from the publisher, which nets you the ebook for free if you get the print book, or you can get it from Amazon or a number of other retailers.

More about the book

You can hear Jon talk about the book on the Are We Podcast Yet podcast as well as on Rustacean Station. No Starch (the publisher) also conducted a longer text-based interview. If you’re after a quick survey of Jon’s writing process, give his Writes With interview a read.

Errata for the book is listed further down on this page.

If you’ve read [The Rust Programming Language] and want to know where to go next, I highly recommend picking up Rust for Rustaceans.

I am so glad this book exists.

I pretty much hate every piece of content i read about rust. its either extremely muddle down with beginner topics mixed in or is just so pretentious it hurts

Rust for Rustaceans is not the case. Its a great book. HIGHLY recommend.

It’s a very dense book. It’s light on code, no pictures. Top to bottom of just text. It doesn’t have projects to follow along with, you don’t build anything, you don’t have practice exercises. I think it’s important to note that before anyone get this book. […]

All said, it’s a great book and one of the very few programming-related book I’ve ever completely read from front to back.

Amazing resource to dive into the nitty-gritty details of how things work under the hood. The author has a great style of explaining these details without unnecessarily overcomplicating matters. I can see this becoming a classic for the ages.

Many of the more confusing language features are covered in-depth in a way that’s unlikely to go out of date, and a lot of what you’ll learn will help you in other programming languages as well. This book is fairly dense, but by the end you should be ready to tackle real-world projects in a way that might feel intimidating right now. Overall, it’s a must-buy for anyone who wants to take their rust knowledge from dabbling to professional.

This is a great book, advancing your knowledge beyond all of the beginner books. […] “Rust for Rustaceans” is just what we need next, a book that covers numerous intermediate topics in a coherent and instructive way. It shows not the mechanics of the language as beginner books do, but the hows and whys of how to actually use Rust, how to think about writing code in Rust, and how to understand how to work with Rust.

I am enjoying digging into “Rust for Rustaceans” by @jonhoo. It’s slender and full of insight.

I can’t say that this book blew my mind, but it has a unique position - it targets people who already know rust and want to level up. And it delivers. If you don’t know rust it will be pretty much inaccessible, but if you - it’s a joy to read. […]

I recently bought @jonhoo’s Rust for Rustaceans and wow am I impressed. In the first chapter he managed to teach me something I thought I knew, and better than any other explanations I’ve seen (subtyping and variance). 9.99/10, lost .01 point cause ferris kinda creepy /j

Just read the first chapter of Rust for Rustaceans by @jonhoo.

Even though most of the topics were familiar, I’ve picked up on so many new ways to conceptualize topics such as lifetimes and borrowing.

It’s probably the only book on Rust for non-beginners (which kinda puts some pressure, doesn’t it? ;>). Fortunately - it’s good, even very good. […]

Finished “Rust For Rustaceans” and it’s a remarkable work. Perfect to elevate your education/inspiration after consuming some of the abundant intro material. It’s also so well written and erudite to be rewarding even for the most advanced of 🦀 users. Hats off to @jonhoo!

Reading @jonhoo‘s book Rust for Rustaceans, and barely two chapters in and it’s already one of the best intermediate to advanced Rust learning material I’ve come across.

I was on a long flight during it picked up @jonhoo Rust for rustaceans oh boy what a read that was. I understood lots of concepts related to compiler memory layouts byte alignment etc…A worth read of the book for every programmer.

Updates since the book's release

The book doesn’t really talk about unwrap and expect, and doesn’t give guidance on when they are and aren’t appropriate. One day it probably will, and it likely look a lot like Andrew Gallant’s recommendations in his excellent “Using unwrap() in Rust is Okay” blog post.

matklad’s blog is an excellent resource for great and concise Rust advice and tricks. See, in particular, the One Hundred Lines of Rust series.

A while ago, Julio Merino proposed using the builder pattern to define test scenarios, which I think is a great idea. In a future edition of the book I’d probably include a section in the testing chapter on “test patterns”, where that strategy would certainly feature.

The Rust Design Patterns book is a great read if you’re looking for quick tips on idiomatic Rust-isms.

MSRV can now be set in Cargo.toml.

Asynchronous streams in the standard library will likely be called AsyncIterator.

cargo-msrv is a super handy tool for finding the minimum supported Rust version (MSRV) for a crate.

insta is a really neat library for doing snapshot testing.

If you spot what you believe to be an error in the book, please submit a PR adding it to the _errata folder in the repository for this site (example).

for Iterator::next, but it should be

The 'a in the example types listed here do not refer to a generic lifetime gathered from <'a>. Instead, it refers to some concrete lifetime that is not 'static, such as that assigned to the type of x in a statement such as let x = &some_variable.

The sentence that starts “All types have a variance” should instead read:

All types with generic parameters (be they lifetime or type parameters) have a variance with respect to those parameters. That variance defines what …

Types with no generic parameters do not “have a variance”. Variance is always defined in relation to a parameter.

The page starts out saying

a Turtle is more “useful” than some unspecified Animal

in reference to Turtle being a subtype of Animal. It is more accurate to say

a Turtle is at least as “useful” as some unspecified Animal

as it may be of no more use than Animal.

In the “non-generic inner functions” info box in the “traits and trait bounds” section, the phrase “you can instead declare such a helper function outside the method instead” contains the word “instead” twice.

Interestingly enough, the RFC uses Tn, though I couldn’t find any rationale for why, and it is almost certainly just a typo. See also this discussion.

The “Wrapper Types” section suggests that Deref functions a little like inheritance, which may mislead readers to using it to emulate OO in Rust, which is a bad idea. At the time of writing, the API guidelines recommend only using Deref for smart pointer types (see also this SO answer), though this may change to apply more broadly to is-a newtypes, which is what the book should also recommend.

The box “Deref and Inherent Methods” should say

methods on T that take &self

That is, it should say &self rather than self to match the actual definition of the Deref trait.

The box should also mention DerefMut and AsRef, both of which have the same auto-dereference behavior.

The sentence “For example, String::from_utf8_lossy needs to take ownership of the byte sequence that is passed to it only if it contains invalid UTF-8 sequences.” in the fourth paragraph of the “Borrowed vs. Owned” section is inaccurate. String::from_utf8_lossy never takes ownership of the input byte sequence. What it does is it leverages Cow<'a, str> to either return the same input bytes reinterpreted as a string slice if they are valid UTF-8, or clone only the valid UTF-8 sequences into a newly-allocated String otherwise.

The paragraph in question should be replaced with:

Sometimes, you don’t know if your code must own data or not, as it is runtime dependent. For this, the Cow type is your friend. It lets you represent data that may be owned by holding either a reference or an owned value. If asked to produce an owned value when it only has a reference, a Cow uses the ToOwned trait to make one behind the scenes, usually by cloning. Cow is typically used in return types to represent functions that sometimes allocate. For example, String::from_utf8_lossy allocates only if the input contains invalid UTF-8. Cow can also be used in arguments for functions that can sometimes make use of owned inputs, but that’s rarer in practice.

The second to last paragraph is missing the word “what”. It should read:

… to provide the caller with as much information about what went wrong as possible.

but should have only two

Listing 7-2 closes the test_battery macro invocation with a closing paren and semicolon );:

… instead of a closing brace }:

The fourth sentence of the “Pin and Unpin” section says “In the code from Listing 8-5, the future that rx.next() returns […]”. While technically correct, it should instead refer to Listing 8-6, since the rest of the paragraph is alluding to the desugared code of the generator.

The statement starting let init in Listing 9-5 should be indented one more level than it is.

“In reality, there’s a lot of machinery between code that uses a variable and the actual CPU instructions that access your memory hardware.”

The sample gives Option<*mut T> as niche optimization used across FFI boundaries. However, the *mut T is nullable, and is not subject to the niche optimization. So, Option<NotNull<T>> should be used as an example.

Since Foo and Bar are zero-sized types, they can be used in place of () in the extern method signatures.

in the final paragraph of the “Pointer Confusion” section is inaccurate. Both Foo and Bar are #[repr(transparent)] wrappers over a c_void, but c_void is not equivalent to (), and its size is in fact 1 rather than 0.

The sentence in question should be replaced with:

Since Foo and Bar are identical to c_void in size and alignment, they can be used in place of the latter in the extern method signatures.

Second sentence of last paragraph, change “does no” to “does not”.

The paragraph on Cargo disk usage suggests setting [build] target in your ~/.cargo/config.toml to use a shared artefacts directory but it should be [build] target-dir.